these projects encompass all of my digital efforts. offline hobbies and creations can be found elsewhere in the museum.

gemini is a really neat internet protocol that's a text-formatted alternative to https://. there's no html, only gemtext, the native language to markup text. what drew me the most to the project is the focus on written content, which requires a longer attention span than i think we're used to on the modern web these days. while there are images, they're not inline, so there's a bigger presence of ascii art. owocean created the yesterweb's own capsule-hosting service: yestercities🔗. 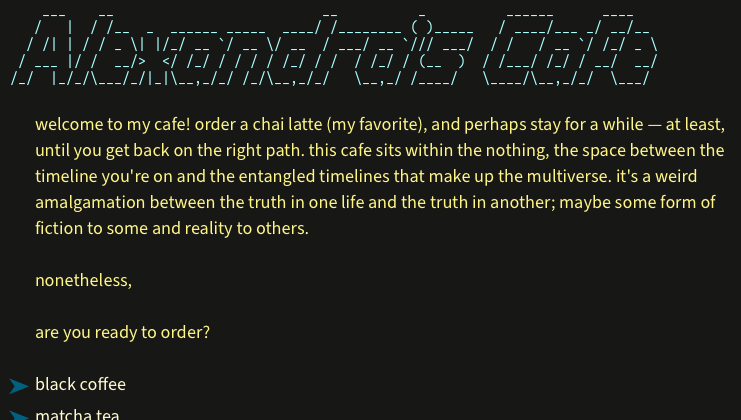 alexandra's cafe is a collection of writing in the form of coffee shop drink orders. there is a combination of non-fiction and fiction writing intermingled with each other, hopefully tangling the notions of reality and story for readers. this mostly serves as an outlet for random pieces of prose i write that isn't fitting elsewhere. i'd also rather keep these writings off the web and leave them as their own treasure for gemini users to find. i hope to later expand into food orders, encapsulating the diner effect.

this project is updated weekly.

after doing some genealogy research over the last summer, i came across research that i could be descended from jean loret, a writer who documented king louis xiv's court and parisian society. i cannot confirm this with certainty, but i can verify that i was descended from étiennette loret, a confirmed filles du roy — a group of about 800 french women sent by the king himself to quebec, a colony, to help colonizers make more families and, ergo, more colonizers for france. 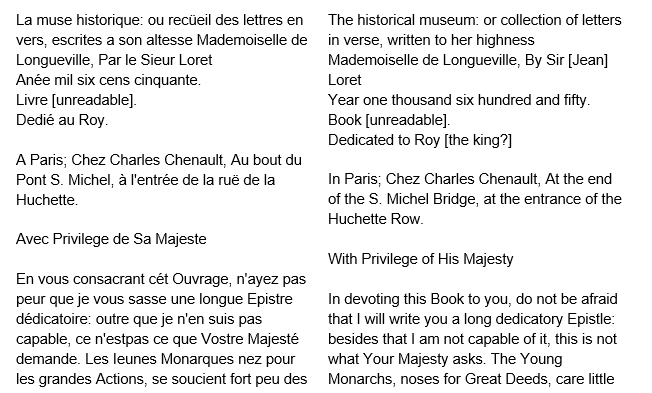 there isn't much information about jean loret, but he left behind la muse historique, a published series of letters to the duchess of nemours in 1650, 1660, and 1665. it has never apparently been translated into english, nor has it been formatted for the web. the only copies of it are in scanned document services, such as google books. despite no fluency in french (or renaissance french, at that), i am trying to utilize AI to translate the entire work. unfortunately, this project is taking much longer than i initially thought, as i'm having to digitize printed renaissance french into typed text and only then use AI to help translate line by line, as i edit along the way. once translated, i hope to release this for free; however, my biggest hope is that there are some answers about jean loret's family within his letters.

this project is intermittently progressing.